Need something different for pizza night? This Brussels sprouts pizza also features bacon and pear for a salty-sweet combo.

Ever since I was introduced to roasted Brussels sprouts a few years ago I’ve looked forward to their season.

I’ve even tried growing them in my garden a few times, but for all the things I’ve grown I haven’t been successful with brassicas.

It seems like every other month or so that article circulates about how Brussels sprouts legitimately are tastier than they were in our parents’ or grandparents’ time.

While this is true, I’m also willing to blame our general dislike of sprouts on how they had been prepared. That is, not very creatively.

Unless you enjoy boiled vegetables, but I don’t.

I first got this idea for this pizza years and years ago after visiting a coffee shop that was serving up spinach, bacon, and pear pizzas.

I was new to Brussels sprouts at the time, constantly looking for new ways to enjoy them, so I decided to remake that pizza but with sprouts in the place of the spinach.

Admittedly, this pizza requires a bit more work than the standard pepperoni pie, but I think it’s worth it.

How to prep Brussels sprouts

For this pizza, you will want to cut the sprouts thinly. This ensures they get cooked on the pizza.

You could also do a quick saute of the sprouts before adding to the pizza. I do this when I have some extra time, but it isn’t necessary.

First, trim off the bottom of the sprout where it was previously attached to the stalk.

Peel off the first outer leaf and discard. Remove any other leaves that might be wilted or browned.

Slice each sprout thinly from top to bottom. You’ll need to hold the pieces in place as you cut, especially as you get to the end, or the knife can slip on the leaves.

Toss the leaves into a bowl, separating them a bit, and continue with the rest.

Add some olive oil, salt, and pepper, and stir well to coat. This will help the leaves soften a little before adding to the pizza.

One question that comes up frequently is, “Do I need to cook the bacon for pizza ahead of time?”

This is understandable, because after all, you’re putting it in the oven!

However, it’s hard to ensure raw meats get cooked thoroughly on a pizza without burning the rest of the ingredients.

That’s why meats like chicken, Italian sausage, and yes, bacon, are cooked ahead of time. Aged salami like pepperoni do not need to be cooked before adding to pizza.

Cook your bacon using whatever method you prefer, but cook it slightly less crispy than you would if you were just enjoying on its own.

This way, it will have been cooked to temperature, but will also crisp a little more in the oven.

When I make pizzas, I tend to go back and forth between whether the toppings will go on top of the cheese or under the cheese.

For my BBQ pulled pork pizza, I put the toppings between the cheese layers.

It really just depends on your preference, but for this Brussels sprouts pizza I like to have the sprouts right on top of the garlicky olive oil, with the bacon and pear on top of that, and finished with the cheese.

This pizza doesn’t use a ton of cheese, instead relying on the rest of the toppings for the flavor.

I’ve made it with mozzarella, parmesan, smoked gouda, and a mix of Italian cheeses, but you really can’t go wrong, so use your favorite.

This recipe makes a 12-inch pizza, but there are enough toppings for a 14-inch pizza. If you do use a larger crust, add enough olive oil to make sure the crust gets an even layer, and however much cheese you prefer.

If you love sprouts, try my spicy glazed Brussels sprouts! 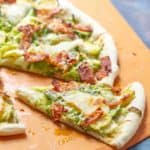