That’s basically what people think of when they think of risotto. And that’s why most people don’t ever bother making it from scratch. Especially now that there are multiple brands out there that make boxed risotto, a la Rice a Roni. I don’t wanna know what is in that stuff, although I’m sure with all the added salt it is delicious.

The 2010 March Daring Cooks challenge was hosted by Eleanor of MelbournefoodGeek and Jess of Jessthebaker. They chose to challenge Daring Cooks to make risotto. The various components of their challenge recipe are based on input from the Australian Masterchef cookbook and the cookbook Moorish by Greg Malouf.

Risotto is actually fairly easy to make, as long as you have patience. And if you prepare ahead, it doesn’t take all that long, either.

For the challenge we needed to make our own stock. Since I am doing my Eat Local challenge, I used a chicken from Dewberry Farms, onion from Hillside Farms, and carrots from Johnson’s Backyard Garden, in addition to herbs. Just cover everything with water in a large pot, bring to a boil, and let simmer while you go do other stuff. After a couple hours you have a wonderfully cooked chicken and lots of stock to use.

We were allowed to do any variation on the risotto, so I stuck with the veggies I had on hand – broccoli and carrots from my CSA box. They worked well, and the only thing I would have changed would be to add more cheese. I was light handed with the parmagiano, mostly because I had just purchased a chunk that morning at Antonelli’s and I wanted to savor it. Also because I kept eating the slivers I had made using my garlic slicer. 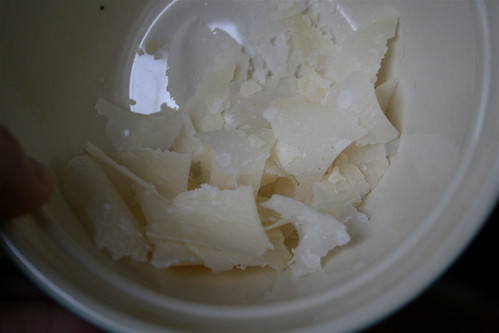 Risotto often tastes heavy, but with these early spring vegetables it was a much lighter dish, and I think it would have paired nicely with a light fish. We ate it as a main course, however, simply adding some French bread and real butter.

For a printable version of the base recipes, click here. 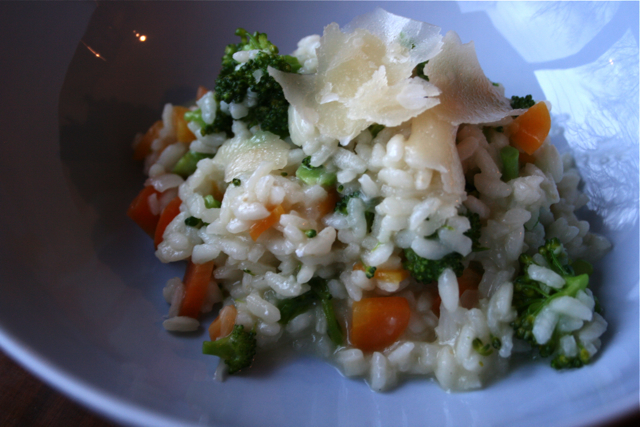