Football has been part of my life for as long as I can remember. When you grow up in Wisconsin, that’s just how it is. On Sundays, the local radio station would start playing Packers-themed music two hours before kickoff. (Yes, there is enough to fill two hours. Maybe more at this point.) The grocery store and the mall were ghost towns during the game. You quickly learned which teachers you had to tiptoe around on Mondays in the event of a loss.

Although I was never extremely into the games growing up, it was always on, so it became part of my subconscious. Now that I live in Texas, I spend half of Sunday griping about how I don’t even get to watch my team, thanks to local channel programming. The rest of the day? I work on recipes, of course.

This particular recipe came together while I was thinking about how Sunday brunch coincides with kickoff. Football people never go to brunch during football season, but they deserve waffles too. Waffles with lots of cheese inside and topped with crispy meat and cool sour cream. Waffles made with beer.

These waffles don’t taste boozy, but you get a nice hit of malt flavor. The yeast in the beer makes it a natural addition to waffle batter, helping the waffles rise and create a fluffy interior with crispy crust.

I used a local German-style pilsner, but I think these would be even better with a dark ale. If you make these, I’d love to know which beer you use! 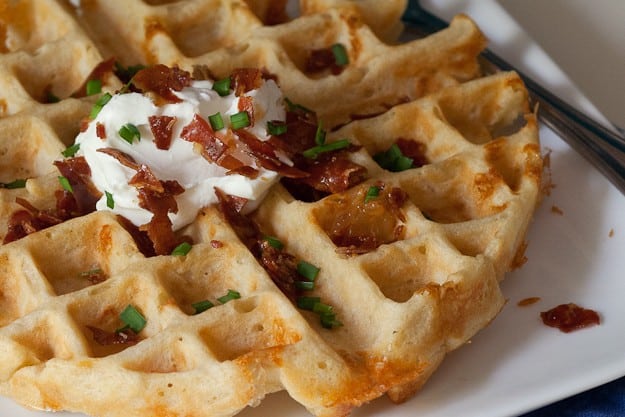