Cinnamon raisin English muffins are fragrant and lightly sweet. Make a batch and have breakfast all week!

Raisins are one of those foods that divide people. Bring down houses. Cause cookie anguish. It’s kind of a lot of pressure on a little fruit, but there it is. If you don’t believe me, just start polling your friends on raisins, and there will be some strong opinions.

I never really hated raisins, but I also never really liked them. That is, until a few years ago. For some reason I started enjoying them and actually started craving oatmeal raisin cookies. A pregnancy plot, possibly. That would at least explain why my 3-year-old can gobble up raisins like nobody’s business.

At any rate, I’ve buried the hatchet with raisins, using them in things like rum raisin muffins and peanut butter cauliflower. I love how you can use them in savory applications or traditional baked goods. And what’s more traditional than an English muffin?

OK, maybe not everyone thinks English muffins are traditional, but I’ve been eating them for something like 30 years, so they’re my tradition, at least. I go on English muffin binges, eating them every day for breakfast with peanut butter or as an afternoon snack with avocado and smoked salt, and I never regret it. My only regret is not making them at home more often.

This recipe is based on my original one for homemade English muffins, but with a few additions. Cinnamon and raisin is just such a classic bread flavor that it had to be made into English muffins!

English muffins are made on a griddle or skillet, rather than in the oven. That means you need to cook them at a low temperature so the outside doesn’t get cooked before the inside. The cinnamon in these will mask some of the browning, but they should still get a nice bit of toasting on the outside.

You don’t want them to rise too much either, so you can place a plate on top of them while they are cooking, if you like. I don’t mind a bit of a rise, so just experiment with what you prefer!

Cinnamon raisin English muffins are just perfect toasted and spread with butter, but add a dollop of your favorite jam if you like! Just don’t go picking out those raisins, OK? 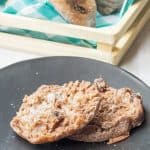