I know. I know what this sounds like. One, I’ve gone completely off the deep end when it comes to this canning thing. Two, I clearly have too much free time, because hello, ketchup?

Number one is probably true, but number two really isn’t. I’ve got so many projects going right now it’s a wonder I can think straight. It does seem strange that I can get so much done plus work a full-time job, but I’ll let you in on a secret. My house is a mess.

Good thing making ketchup is a bit hands-off once you’ve got it in the pot, because then I can run around picking up toy cars, folding laundry, and checking Twitter.

What? Just being honest here.

OK. The ketchup. When I was at Camp Blogaway we received the gorgeous cookbook Eating Local. I was planning on buying it anyway, so score! Flipping through it, trying to find a recipe to use the produce we had in season at the time, I came across the Nitty Gritty Dirt Farm Ketchup. Except, it had about a bazillion ingredients. So I turned to Jam it, Pickle It, Cure It, but that recipe used canned tomatoes and seemed almost too easy. I did my best to combine the two, and I think for my first try at ketchup it turned out fairly well. 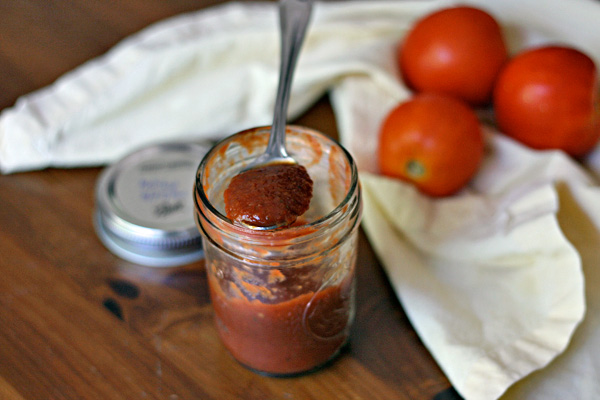 Why bother making my own ketchup? Having a small child means there is a chance of going through a lot of ketchup. While there are now many brands that use regular sugar instead of HFCS, I still don’t know what exactly goes into the creation of that bottle. This one of the main reasons we do home canning – those of us who are concerned about what we put into our bodies are more able to trust the products we make ourselves. Homemade ketchup tastes great – actually like tomatoes and spices, not like sugar. You won’t get the same uniform puree that the bottled stuff has, but this does thicken up rather nicely, especially after being stored in the cupboard for a while.

The thing about this ketchup – when you think you’re done, cook it longer. You really want good low-and-slow simmer on this in order to make sure it goes from a strange pasta sauce to an almost-paste.
It’s also important to make a bouquet garni for the spices, because you won’t be dividing them up into each jar (like you would for making pickles, for example). Usually people use squares of cheesecloth for this, but when I made the ketchup I actually used some medical gauze! I also like to use tea filters.

I’d post the recipe for this, but I really think you should go out and buy Eating Local. Even if you’re not interested in making ketchup, there are a lot of other yummy recipes and the photography is lick-the-page gorgeous.

What did you do with your tomatoes this year? Have you tried making ketchup?