Canning is the new knitting. Or is it the new sewing? I can never remember what the correct order of domestic fads is. All I know is that everywhere I look I see people canning.

Ball, the major producer of canning supplies, had record sales in 2009. Even if you don’t know anyone who cans, that should tell you something.

I love seeing this revert back to simplicity. I’m sure many of you will say it is easier to run to the store when you need more jam, but canning is a lot easier than most people think. And seeing a cupboard stacked full of goodies you created yourself has a high level of satisfaction attached to it. It’s the fruits of your labor. Literally.

Not to mention how fantastic this stuff tastes. I love canning because you know exactly what goes into it. Definitely no high fructose corn syrup here.

Just the amount of sugar you want. Spices you want. Combinations you can’t get at the grocery store, at least not for a reasonable price.

Last month while surfing the myriad food blogs I read, I happened upon tigress’ can jam and instantly signed up. Why not? I already wanted to can more in 2010, probably to the horror of my husband who doesn’t quite understand why we need so many berries or tomatoes.

But considering we’re on our last jar of strawberry freezer jam (granted, I gave away two), I need to remedy the situation in spring, with strawberry, blackberry, and jumbleberry jams.

There will also be lots of salsa, provided I can find a recipe we like. And whatever else the Can Jam will bring, because each month we have a theme to work with. I’m excited.

Even though my January can didn’t go as well as I’d hoped.

January’s theme was citrus, and while I adore clementines, they’re not local (a key part to the Can Jam, as it should be). So I picked out some huge Texas red grapefruit and found a recipe that sounded good. Vanilla Grapefruit Marmalade.

I had problems getting the marmalade thick enough, and even unsealed the jars and redid them the next day, adding pectin. But it was fun to do, and smelled pretty great as it was cooking.

Added bonus of my hands smelling like vanilla the rest of the day after scraping the beans. (Does anyone have a good method for bean scraping? I always make a mess.) After I had it all done I tasted a little, and I remembered something I had forgotten — I don’t actually like grapefruit.

And I might have done it wrong, or maybe my grapefruit were just stronger, or I cooked it too long, or something … but this was a bit bitter. It makes me sad, but what are you going to do? Learn from it and move on. Maybe it will be great on ice cream or mixed with honey.

Fortunately, a few days later I tasted the marmalade on some buttered toast and it was a lot better. Plus I gave a jar to a grapefruit-lovin’ friend and she raved about it. So I didn’t do anything wrong; it’s just the grapefruit! 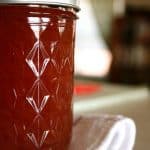