Nearly three months later, kindergarten is still a transition. Amid his successes in the classroom, home life is fraught with denied exhaustion, harsh words, and frustrated tears.

You could say we’re still trying to find a balance, but when you’re six years old, I’m not sure balance is even an option. Throw a baby brother into the mix, and it’s no wonder 3 out of 4 people in this house are in or near tears every night.

I can’t control what happens during the day, but the least I can do is put a good breakfast in him. We really enjoy biscuit breakfast sandwiches, but I don’t get much time to make them during the school week. Plus, even when I buy the best sausages I can, I don’t like not being in control of the ingredients. Then I remembered how easy it is to make your own.

Making sausages with chicken is as simple as getting white and dark meat (already ground if you don’t have a grinder at home) and mixing it with whatever spices and other ingredients you want. For this sausage, I added Skellig, Kerrygold’s newest cheese.

I first tasted Skellig after Maggy from Three Many Cooks hooked up my pregnant self with a lot of cheese and butter. Almost immediately it became my new favorite cheese — it’s a sweet cheddar, but not sweet-sweet in the traditional food sense. There’s also a bit of nuttiness that is in all the cheeses that I really love.

Skellig pairs really well with apple and maple syrup, so I added those into the sausage as well. With the small cubes, the cheese doesn’t make a melty mess in your pan, but adds bites of flavor within the sausage.

And the verdict? Well, when I served these up for brinner, my son said, “I wish I had one hundred of these!” Sometimes, all you need is a hug and some homemade food. 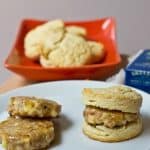 Disclaimer: I received cheese and butter from Kerrygold to create a Skellig recipe as part of their contest for the Kerrygold Bloggers Network. All opinions are my own, and obviously, I like cheese.