Dark chocolate fudge with sea salt is a super-easy treat to make any time.

Sometimes blog posts are brought on by the season, or an inspiring vacation, or someone special.

Sometimes you think of things in the bathroom.

…Get your mind out of the gutter.

The other day, I was putting things away in the bathroom, thinking about the long list of blog posts I have in draft form. Not just recipe posts, but posts about recent trips, recent restaurant meals, and more, including a weekend in Houston that landed a friend and I in some very delicious places.

At one of those places I came away with some local sea salt — sourced from Galveston, to be exact, so I suppose it’s Gulf salt, but that doesn’t quite sound as nice.

I hadn’t yet cracked open the jar of salt yet, and in approximately five seconds I decided I needed to make dark chocolate fudge immediately.

I hadn’t made fudge in about 20 years. For Christmas a few years in a row, with a couple additional forays thrown in among them for good measure, I’d make a batch of fudge to give to my aunt (foodie gifts already cemented in my brain, apparently).

At the time I didn’t know about humidity variations, stovetop differences, or that learning to cook and bake with margarine would really screw me up in later years.

All I knew was that when you’re 13, you don’t want to spend a bunch of money buying ingredients for a recipe that doesn’t work.

That still holds true today, which might be why I try to stick with few ingredients when it comes to the things I make. It’s why recipes like Spicy Glazed Brussels Sprouts and Baked Bison Meatballs are staples around here.

(Although, sadly, it also means I don’t make King Ranch Casserole nearly as often as I’d like, but probably just about as often as my waistline allows for.)

Enter this dark chocolate fudge. It’s two ingredients. OK, three once you count the salt. Four if you want to go crazy and add the almond extract.

But all you really need to make this Dark Chocolate Fudge is two simple ingredients: chopped dark chocolate and sweetened condensed milk.

how to make dark chocolate fudge

As you’d imagine with a recipe that only requires two ingredients, the directions are pretty straightforward.

Outside of lining a pan with parchment paper to make it easier to remove the fudge later, all you have to do is melt the chocolate and condensed milk together before spreading it into the pan.

Sprinkle it with some of that wonderful flaky sea salt if you’d like. Chill, cut, devour.

Now, I admit that when you mix this up, it might look kind of weird. Gloppy even. It will seem like it isn’t going to work.

But go with it. Even if you don’t get fudge, you’ll have a big ‘ole pan of chocolate, and that’s not something to complain about. 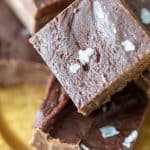