I’ve always loved Mexican/Tex-Mex food, but of course now that I live in Texas my intake of it has skyrocketed. We’re not going to talk about how much I ate when I was pregnant. At least I can blame that on the baby that was growing inside me. Not that my cravings for it have let up one bit!

I missed the Daring Cooks’ challenge last month so it was good to hop to it again.

Our hosts this month, Barbara of Barbara Bakes and Bunnee of Anna+Food have chosen a delicious Stacked Green Chile & Grilled Chicken Enchilada recipe in celebration of Cinco de Mayo! The recipe, featuring a homemade enchilada sauce was found on www.finecooking.com and written by Robb Walsh.

Even though it wasn’t too much of a challenge for me, I still appreciate it when our recipe is something I already know I love! Since we were able to do whatever kind we wanted, as long as we made an enchilada sauce, I decided to make a breakfast version. I love breakfast, so it was basically a no-brainer, and a win for everyone involved.

The enchilada sauce is insanely simple. I keep diced Hatch peppers, roasted last summer, on hand in the freezer. I used up my last three cubes, about 3 ounces, to make this sauce. The only other things you need for it is vegetable broth, flour, salt, and pepper. Seriously. Combined with tortillas, farm eggs, bacon, and raw milk cheddar cheese, it makes for a nice change-up from the standard breakfast taco. (Don’t worry, I still love you, breakfast taco!)

Now, I know the traditional enchilada uses corn tortillas, but I loved the way these flour rounds crisped up. You can easily swap in corn tortillas, if you prefer, though at that point you might as well just make migas! 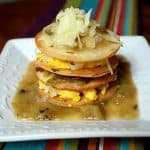