I’m not sure how cinnamon rolls got to be the quintessential holiday breakfast, but I’m not one to complain about it.

Like many kids born in the ’80s, many a Christmas morning, Mother’s Day brunch, and Thanksgiving pre-feast breakfast centered upon a can of ooey-gooey cinnamon rolls. If you were really lucky your parents would surprise you with Cinnabon.

These days I try to stick to making cinnamon rolls from scratch.

Let’s be honest. This chocolate cinnamon rolls recipe is completely over the top, when it comes to breakfast food.

Then again, I guess I have a habit of that, based on chocolate waffles with whiskey butter sauce or bacon and egg risotto.

One of the reasons chocolate cinnamon rolls are special-occasion breakfast food is because they are best served to a crowd so they can swoon over your hard work. Mother’s Day is coming up, you know, and wouldn’t she be impressed if you made these instead of thwacking a can on the counter?

I made these a while ago but am only getting around to sharing them with you now (sorry). When you have lots of recipe ideas floating around in your head, and only a limited amount of time to make and share them, some things just have to wait!

However, you won’t have to wait long when you make this chocolate cinnamon roll recipe.

In fact, I recommend mixing these up the night before (like tonight, maybe?) and letting the rolls rise in the fridge. After a quick preheat of the oven, you’ll have warm, gooey cinnamon rolls ready before your kids even manage to wipe the sleep from their eyes.

Chocolate cinnamon rolls rolls are sweet, to be sure, so you can make them smaller if you like by rolling the dough out longer and then cutting more rolls.

With chocolate in both the dough and the filling, you won’t find need for it on top unless you have a serious sweet tooth! You can even skip the chocolate chips inside if you like, for a more subtle chocolate flavor.

Chocolate cinnamon rolls are best served while still warm from the oven and right after drizzling with glaze, but they do reheat well.

Simply cover any uneaten rolls with plastic wrap and store in the refrigerator, and then when ready to eat, slice off as much as you wish and pop into the microwave for 30 seconds.

how to make chocolate cinnamon rolls

Homemade cinnamon rolls are one of those things that impresses the socks off of anyone you serve them to. But after the first time you make them, you’ll have the hang of the process and want to make them all the time.

The dough I use for chocolate cinnamon rolls is easy enough that you can mix it together in a bowl with a wooden spoon. No fancy stand mixer required!

When the dough is mixed together, get your hands in there and knead it until it is smooth. This usually takes me around 6 minutes or so. Cover the dough and let it rise until it has doubled in size, about 1 hour. (I like to use [amazon_textlink asin=’B01HCU4P3S’ text=’shower caps’ template=’ProductLink’ store=’stetted-20′ marketplace=’US’ link_id=’68aaabe3-fe34-11e8-8863-9952bc4fb848′] to cover since they fit around bowls perfectly!)

Once the dough has risen, go ahead and roll it out into a rectangle and top it with the cinnamon-sugar mixture and mini chocolate chips.

Roll it up from the long side and cut it into 12 pieces. I use a knife for this but have seen people use dental floss as well! Just make sure to use the unflavored kind.

Place the rolls in a greased baking pan. If you wanted to prepare them the night before, this is where you would cover them and place them in the refrigerator overnight.

A visit to the oven 30 minutes later (or the next morning) will yield you chocolate cinnamon rolls that are puffy, soft and perfectly chocolatey. All they need are a simple glaze to finish them! 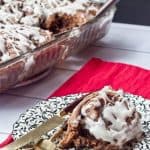