The about a month ago NPR reported that despite the recession, people are actually spending more money. (A fact backed up by our record $52 billion spending over this Thanksgiving weekend.) Although it doesn’t make financial sense, I can understand the desire.

In the United States most of us are raised on a culture of plenty, and the idea of “going without” is unfamiliar and strange. Anyone who has ever worked on debt reduction knows the reactions from friends often reveals a lack of desire to get spending under control, no matter how much they praise your efforts.

Now that I’m not working for a paycheck full-time (taking care of my son and the household are certainly full-time jobs, though I only get paid in snuggles and zrbbts) the budget falls even more on my shoulders. I’ve been informally in charge of it for years, but now I’m more conscious of every single penny.

I’ve always been a spender at heart – I started working when I was 14 and yet saved only about $500 for college – but somewhere in there I have a nerdy, thrifty mind. This might be where my canning obsession came from. Having canned for a few years now, I know what we eat and what we don’t.

Predictably we blow through tomato-based products, but jam? Not so much.

Both the little and big guy love peanut butter and jelly/jam sandwiches, but it would take daily sandwiches and a bigger family to work through the stash that I keep replenishing.

Two years ago I made apple butter from Cameos we picked out near Fredericksburg, and it took a year and a half to work through it all. Yet I found myself again making apple butter this year – after all, what do you do when confronted with approximately 20 pounds of apples? You make hay while the sun shines.

The apples were certainly a gift, coming from my friend Kathryn just a day after I was lamenting that I hadn’t gotten to the farmers’ market to pick up a big bushel. Kathryn doesn’t can, so once she had made a batch of apple butter to store in the fridge, she didn’t quite know what to do with the giant crate of apples. Enter me and my clamoring-for-applesauce son.

For two days I did nothing but focus on these apples. Because they were “seconds” and not necessarily good for straight-up eating, I needed to work quickly. When I was working on my apple pie filling last month I went ahead and bought one of those apple peeling contraptions that seemed silly at the time, but has become one of my family’s favorite tools. It takes a bit to get used to, but once you get into a groove the apples quickly become a dissected pile of cores, peels, and neat slices.

When you have 20 pounds of apples, quite a bit of it is peels and cores, and I just couldn’t bring myself to toss them all. (I did toss some toward the end, and I actually feel guilty about that.)

Once the applesauce was done, the apple jalapeno chutney cooling, and the sage apple butter reducing away, I cleaned out my stockpot, pulled the scraps from the fridge, and went to work. After adding water to the scraps, cooking, and straining, I had 3.5 liters of apple juice to work with.

Inspired by Kate I knew I had to make a cocktail for that night’s ATX Swappers, and the rest would turn into apple cinnamon syrup.

I absolutely adore real maple syrup and have lovely memories of visiting a sugar shack as a child, but naturally flavored syrups also have their place at the breakfast table.

I love that with this recipe you’re making something out of practically nothing. Maple syrup is expensive, and I’m glad to have this method in my back pocket. Added bonus? Everyone will think you’re being gourmet, not thrifty. 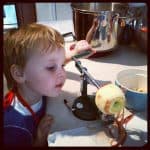 Note: Although apple season is over here in Texas, this recipe would work equally well with pear scraps.