Raspberry Chipotle Wings are cooked on the stove and coated in a sweet and spicy raspberry chipotle sauce for a game-day snack that will keep everyone coming back for more.

‘Tis the season for football to be on seemingly everyone’s minds. Well, at least a part of nearly every office or social media conversation.

Truthfully, once my beloved team gets knocked out of the playoffs, I stop caring about football or making plans to spend the big game annoying my native-Vikings-fan husband.

Oh, sure, I’ll watch it, but I’ll probably be multitasking with some other project. I’m really only there for the pimento cheese jalapeño poppers, roasted veggie dip and roasted garlic guacamole.

If there’s anything Americans do well, it’s making copious amounts of food for every slightly celebratory occasion. That’s truly our national sport.

It also wouldn’t be an American celebration, and certainly not a football party, without chicken wings. This year, I’m adding raspberry chipotle wings to our snack lineup.

These raspberry chipotle chicken wings are easy to put together and are a nice alternative to some of the other flavors out there.

Raspberry chipotle is a favorite combo in certain parts of Texas. I’m definitely not one to turn down anything with raspberries, in case you hadn’t noticed from my raspberry bran muffins, raspberry jam cookies, or raspberry fudge pudding cake.

In these raspberry chipotle wings, the raspberry is a sweet and slightly tart counterpart to the spicy, smoky chipotle. It’s an unexpected pairing that will be welcomed with open arms (and mouths) for the big game.

You can use fresh raspberries for the raspberry chipotle sauce, of course, but organic berries are often hard to find at a good price in January. Frozen raspberries work just as well, and you can create the sauce without thawing them, letting the thawing happen in the pan.

I’m here for saving time, especially since I can never seem to remember to thaw anything ahead of time anyway.

how to cook chicken wings in a pan

Instead of baking or deep frying them, these raspberry chipotle wings are cooked in a skillet, freeing up the oven for other snack preparations.

While the sauce simmers in a saucepan, brown the chicken flats and drumettes in batches. They’ll be browned on both sides but not cooked through.

Once the sauce is combined and the raspberries and chipotle pepper are broken down, the sauce and wings get combined in the skillet and simmered until the chicken is cooked through and the sauce is thick and glaze-like.

Even better, raspberry chipotle chicken wings can be made ahead of time and reheated in a 350°F oven for 10-15 minutes. Be sure to put them on parchment or a Silpat to reduce sticking! 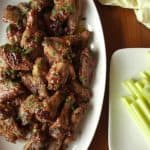